Best of British hand made in Sheffield with Derbyshire’s beautiful Blue John gemstone.

Blue John is prized for ornaments and jewellery. It can be found in many great collections housed in places such as Windsor Castle, the White House and the Vatican. The ancient romans took examples back to their Emperors in Rome.

Blue John stone is a rare, semiprecious mineral found at only one location in the world. It is only found in a hillside near the ancient Stone Age hill fortress of Mam Tor. Unique to Castleton, in the Derbyshire Peak District, England. The most beautiful of our truly British semiprecious stones.

One theory for the origin of the name Blue John suggests it derives from the French Bleu-Jaune meaning simply Blue-Yellow.  This refers to the variation in colours from Yellow to brown then purples all the way to blue. Each piece is always different in colour and stripe and as a result each piece is unique.

Blue John is a form of Flourite discovered in ancient times as miners were exploring the cave systems of Castleton for lead. Roman lead ingots have been found stamped with the legionary mark for the local garrison legion.

Blue John is prized for ornaments and above all jewellery. It is found in many great collections housed in places such as Windsor Castle, the White House and the Vatican. The ancient romans took examples back to the Emperors in Rome. Today Blue John is popular with Derbyshire folk in jewellery as it means they always have a piece of Derbyshire wherever they travel. Blue John is also popular to wear to weddings for good luck as ‘something blue’; from the saying ‘something old, something new. Something borrowed, something blue’.

Chemically, Blue John is Calcium Flouride (CaF2) which has been coloured by films of oil deposited on the crystals millions of years ago. Although it is known as flourite, the old miners, referred to it as fluor spar.

Flourite often forms in cubic and octahedral crystals and is usually grey, Yellow or purple in colour. 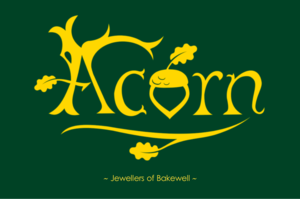 Absolutely amazing service from owners...
Couldn’t be any more grateful for the deal we got with the bracelet and two charms, great price! Happy fiancée and our bracelets are looking brill.. thank you both so much and the pooch Gandalf (it was) lovely to meet you x

The shop is lovely, with a wide selection of jewellery...
People very friendly and even let my daughter try some jewellery on… I’ll definitely be visiting the sister store in Chesterfield. Oh, and I bought a pair of beautiful green amber drop earrings!

Bought my first piece of Blue John jewellery in a ring...
Laura Jo was so helpful and patient… I especially love crystals to wear and own and this piece is lovely. I will most definitely go again in the future to add to my newly found blue john piece. Can highly recommend…

Fantastic and knowledgeable customer service...
Such a warm friendly welcome, and had such a fun and professional service, lovely shop with some beautiful and quirky pieces, something for everyone.! Would highly recommend and will definitely be ordering from there again!

Looking then purchasing for daughter's 18th birthday...
The lovely man behind the counter is very knowledgeable, friendly and he doesn’t push you to buy. It’s a very relaxed atmosphere and love his assistant (his beautiful dog)…

Will be recommending you all to our friends...
We called in today and bought 2 Nomination bracelets and charms for myself and the daughters. My Aunt also had her eye caught on the beautiful Blue John stone necklace and purchased it too! Great customer service from Adam and Gandalf, thank you so much!

Just called this afternoon and was welcomed no pressure...
Had a lovely chat with the owners. Only (went in) to enquire about a price and came out buying the bracelet without any hassle lovely professional service